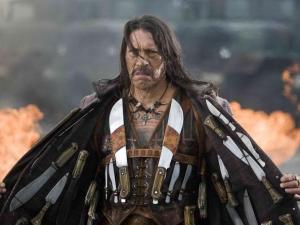 How did you get involved with Machete?
Machete! He kills the bad guys and gets the women! Robert Rodriguez had the idea when we were doing Desperado about 10 years ago. He told me, ‘I want to do this character, he’s great, you’re perfect for him, he’s called Machete, he’s an ex-federal agent that fights with machetes.’ We talked about it for 10 years. Then the trailer got such a good response, and literally he said, ‘We have to do this.’

What was the best part of the shoot?
Kissing Jessica Alba. I kissed her eight times. She’s got absolutely stunning good looks, beautiful. For her I’d work over-time.

Are you upset Lindsay Lohan is being sent to jail?
Yeah. She was awesome, she was a professional little girl and she’s doing the same thing as every other young girl except she has a camera following her 24 hours a day. And that’s not an excuse, but it’s tough living under a microscope. Some of us start feeling that we’re above the law, and that’s not true.

What do you love about working with Robert Rodriguez so much?
Even though he works, he makes it a vacation. He’s just fun. He truly believes that he’s really blessed, so how the hell can he call this work?