‘This thrill-ride will delight and enthral’ – heat 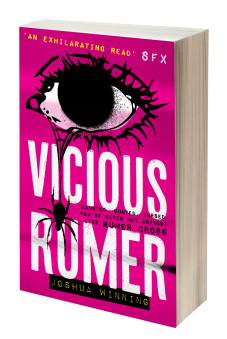 Own it Spread the Rumer!

scroll to find out more

Joshua Winning is an author and film journalist who writes for TOTAL FILM, SFX, GAY TIMES and RADIO TIMES. He has been on set with Kermit the Frog, devoured breakfast with zombies on The Walking Dead, and sat on the Iron Throne while visiting the Game Of Thrones set in Dublin. Jeff Goldblum once told him he looks a bit like Paul Bettany.

In 2018, Joshua’s thriller VICIOUS RUMER was published by Unbound. His dark fantasy series THE SENTINEL TRILOGY was published by Peridot Press, and he also co-wrote ’80s teen horror CAMP CARNAGE. In 2015, Joshua’s short story DEAD AIR appeared in SPEAK MY LANGUAGE: AN ANTHOLOGY OF GAY FICTION.

Joshua grew up watching Labyrinth and The Neverending Story on repeat, and was raised on a steady diet of Whedon, Cameron and Lucas. His literary heroes include Robin Jarvis, Stephen King and Daphne du Maurier. As a journalist, he has interviewed some of the most exciting names in the film industry, including Jodie Foster, Ryan Reynolds, Charlize Theron and Christopher Lee. He dreams of getting Sigourney Weaver to yell “Goddammit!” at him one day. 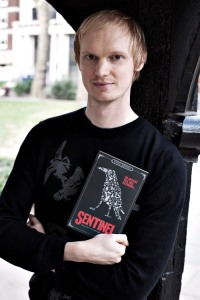 ‘Hugely entertaining’ – SciFi Now
‘If you love action and mystery, this is for you’ – Guardian Children’s Books
‘I wish there had been more books like this around when I was a teen’ – The Eloquent Page

‘It’ll keep you up all night’
Closer

‘Brutal, stylish and relentless’
Chris Whitaker, author of ALL THE WICKED GIRLS

RUMER CROSS IS CURSED. Scraping by working for a dingy London detective agency, she lives in the shadow of her mother, a violent criminal dubbed the ‘Witch Assassin’ whose bloodthirsty rampage terrorised London for over a decade.

Raised by foster families who never understood her and terrified she could one day turn into her mother, Rumer has become detached and self-reliant. But when she’s targeted by a vicious mobster who believes she’s hiding an occult relic, she’s drawn into the very world she’s been fighting to avoid.

Hunted by assassins and haunted by her mother’s dark legacy, Rumer must also confront a terrible truth: that she’s cursed, because no matter what she does, everybody she’s ever grown close to has died screaming…

Own it Spread the Rumer!

It’s been over 10 years since the Halliwells hung up their brooms, so I’m heading back to San Francisco to see if Charmed‘s special brand of supernatural… END_OF_DOCUMENT_TOKEN_TO_BE_REPLACED

Hello fellow book lovers! Hope you’re having a spine-crackingly good 2019 so far. Back in November, I decided to get organised and plan out my next five… END_OF_DOCUMENT_TOKEN_TO_BE_REPLACED

Originally posted on BOOKS FROM DUSK TILL DAWN:
BOOK DESCRIPTION ‘An exhilarating read’ – SFX ‘Introduces a truly badass heroine to the world of YA’ – Book…

As part of an ongoing series, Joshua grabbed his conical hat and headed back to San Francisco to rewatch some of his favourite episodes of Charmed. Was Prue really an egomaniac? Did Piper ever get her ‘normal’ life? Time to find out…

Joshua loves getting mail, and he reads everything that’s sent in, so whether you want to grill him about something movie-related or find out more about his books, drop him a note below.