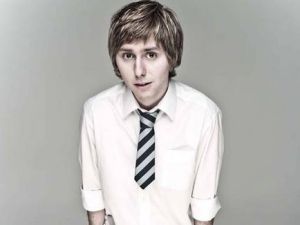 My Comedy Hero
I watch more television but my comedy hero is Steve Coogan. The last film I saw him in was The Others Guys, which I thought was quite good. Without sounding stupid, obviously, he’s funny, but on top of that he’s just a great actor, he’s absolutely brilliant. Unless I’ve had lines written for me, I don’t consider myself to be that funny, but Steve Coogan’s the best at it.

My Favourite Funny Movie
I guess it would have to be National Lampoon’s Christmas Vacation. I watch it every Christmas. I just think that movie’s perfect, it really is funny. You know, you can watch it by yourself and you’ll still laugh out loud even though there’s no-one around. I love that film. Chevy Chase was in another film with Dan Aykroyd, but I can’t remember what it’s called.

My Favourite One-liners
The one that just sprung into my head is Ace Ventura after he’s been investigating at this swanky party, and he’s been wrestling with a shark. He comes out of the bathroom and he’s ripped to shreds and dripping wet, and he just shouts “Whew! Do not go in there!” That’s a really good moment. That’s a great line to use in everyday life.

My Comedy Present
We’ve just finished The Inbetweeners movie, we’ve got another week of pick-ups in June then it’s done. I’m not sure how much I’m allowed to talk about it. We’re lucky that we all get on and I guess that comes across on screen as well. It would be a really tough job if we all didn’t get along, you spend so much time together. Joe and Simon are shooting a pilot in a couple of weeks but I didn’t get a phone call.

My Comedy Future
I’m looking forward to The Hangover Part II. I think that comes out around the same time as our little film that we’ve made, so bring ‘em all on, we’ll take ‘em. The first film is quite perfect for a comedy, the fact that it’s in Las Vegas just makes it larger than life, even the location was a clown in itself. It has all you need: some people go on an adventure and things go wrong for them.

My Comedy Past
The whole sequence in the season two episode of The Inbetweeners when the boys go on a field trip with the school and then end up in a little boat… I was really confident that that was going to come across well. I think it was funny, even if I do say so myself. I’m really proud of that. It isn’t easy to be funny, but with The Inbetweeners we’re always asking ‘Is this funny?’ because all we want to do is make people laugh.