Briefly: the lovely people over at Total Film have caught up with Guillermo del Toro about the 1.57 million (approx) films that he’s currently got in production. One of those is a fresh adaptation of Roald Dahl’s classic The Witches. Being a huge fan of 1) the original book, 2) the gloriously creepy ’90s movie adap starring Anjelica Huston and 3) del Toro, this fresh chatter has filled my stomach with a million little sharp-toothed butterflies that just won’t stop nippin’!

Here’s what Guillermo had to say about his vision of a new Witches adap:

“We got the highest compliment from Lucy Dahl, Roald Dahl’s widow. She said to us it was ‘the most beautiful adaptation of my husband’s work’. I tried to be very faithful to the book to the point that I was literally having a page-by-page reading as I was writing the screenplay and marking the pages…

“It was very different from other adaptations I have done. It was such an important book for me growing up that I wanted people to not only recognise but be almost flabbergasted at how faithful the movie was to the book. And that includes a very touching, tender relationship between the boy and his grandma and some of the most Roald Dahl-esque shocking moments with the witches. The rhyming and singing of the witches, talking about broiling and boiling the boys – the more disturbing aspects.

“I want to preserve the pathos and the darkness of the piece and that’s why it’s taking so long because it’s very hard sometimes for Hollywood to wrap around their head, ‘oh, it’s a classical children’s tale that includes dark aspects.’”

Who needs history lessons when you’ve got Hollywood? Especially a Hollywood that’s so keen on subverting stone-cold facts for the sake of blinding blockbuster entertainment! Timur Bekmambetov’s Abraham Lincoln: Vampire Hunter promises to do just that.

The first image from the currently-shooting genre splicer’s been released online, and shows off Benjamin Walker as the titular hero. It’s nothing particularly juicy, but it definitely whets the appetite for what is sure to be one of the year’s coolest films.

Based on Seth-Grahame Green’s cheeky bestseller, Vampire Hunter recasts the 16th US President as a bad-ass vamp slayer. I’ve yet to read it, but apparently it toys with history, and posits that the only reason Abe was so keen on abolishing slavery was because the industry was rife with neck-chewers.

Director Bekmambetov’s apparently under strict orders not to talk about his fangy fiends (“The one thing I’m not supposed to talk about is the look of the vampires,” he tells The New York Times), which means we must be in for something really awesome…

What made you finally embrace a fourth Indiana Jones movie?
It’s not for money or success. It’s for the good times. I’ve always said that I had the most fun in my life while making those three movies with George [Lucas] and Harrison [Ford]. It’s a very good story. It’s worth living that long to see!

Do you think your fans would like to see a sequel to ET?
ET was a very personal little picture. My motivation for making it was pure and non-profit based – I didn’t think it would be a hit because it was about kids and no films about kids under 18 were doing any business then. I wouldn’t make a sequel because it couldn’t be superior to the original and I don’t want to blemish a perfect picture. 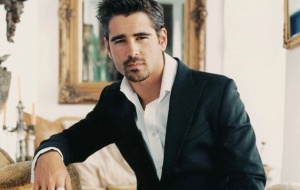 Colin Farrell’s been talking up his reboot of Total Recall. Even though I’m loathe to acknowledge that such a thing can possibly exist, it’s at least interesting to hear what he has to say. According to him:

“The film, tonally, is really different. I loved that original and I’ve seen it recently and it’s still great. It’s so enjoyable from start to finish. But it’s really camp. I’m not sure how camp it was back then, because I didn’t have a reference for such notions when I was a kid. I didn’t find out my brother was gay until later, so I didn’t know what was camp! But yes, it is very much a different tone. It’s quite a bit darker.

“I say this not in a disparaging way, but there’s not as many kind of winks to the audience. It’s played a lot more straight. And of course, it’s going to be with the advent of certain technologies and special effects. I’ve seen some of the pre-vis stuff that Len has already designed with his team. It’s fucking amazing, man! I don’t know what the film is going to be like, but lookswise, it’s incredible.”

First off, Arnie fighting a spandex-wearing Sharon Stone before heading off to Mars in a fat-woman disguise then meeting a chick with three tits is CAMP?! What kind of universe does Farrell live in?

Oh, alright, I can sort of see his point. The original is completely ‘90s in a great, cheesy, screaming Arnie sort of way. But my love for it refuses to wane, especially because of its clever camera trickery and use of old school (or, yeah, modern in those days) effects. Farrell’s reboot is going to have to be something seriously special to trump it.

Here’s Brad Pitt. With a gun. Looking mean as hell. It’s the first shot of him from the currently filming thriller Coogan’s Trade, a book adaptation helmed by Andrew Dominik (the director of moody Western The Assassination Of Jesse James By The Coward Robert Ford).

I’ve not read the original Coogan’s Trade novel, and I’ve yet to see Jesse James (it’s been sat forlornly in the ‘To watch’ pile on my bookcase for months), but I’m still pretty hyped for this. Why? Well, for a start it has a cast that includes Ray Liotta, James Gandolfini, Richard Jenkins and Ben Mendelsohn.

Then there’s the film’s plot, which has Pitt playing mob enforcer Jackie Cogan, who investigates a dodgy high stakes card game. Considering all the praise Dominik and Pitt received for Jesse James, this second team up ought to be something equally special.

Also, wow, Brad Pitt overload on the blog today. The man must stop being so freaking cool.

Pic via The Playlist

Two super-size trailers have crash landed online today in the form of a suped-up second Green Lantern showcase and our first look at Jason Momoa in greased-up action as Conan The Barbarian. Both look like your typical, bloated summer blockbusters, packed with soaring CGI-scapes and heroes you can really believe in. Both are for movies that seem to be generating a rippling sea of shrugs throughout the movie world.

To be fair, this fresh Lantern trailer at least gives us some awesome imagery in the form of an all-out assault on Earth, while Peter Sarsgaard looks suitably hideous as big-brained Dr Hector Hammond. Blake Lively, though, looks bored out of her mind, while the CGI Lanterns are still all, well, cheesily CGI.

As for Conan, did nobody learn from The Scorpion King?

What I really care about is who’d win in a fight between the two super men. Conan vs Green Lantern! Now that’s a trailer I’d be interested in seeing…

And that’s not even me getting my early morning snark on – that’s genuine, bonafide news reportage right there. Because the lovely Ms Weisz has just been cast as evil hex-hurler Evanora in Sam Raimi’s Oz, The Great And Powerful, a prequel to The Wizard Of Oz.

Except I seriously doubt that the porcelain-pretty Weisz will be forced to ‘ugly up’ by her director – even if Raimi’s last film was Drag Me To Hell.

That said, I wouldn’t mind seeing a gummy Weisz sucking on James Franco’s chin. Just for the laughs, of course… 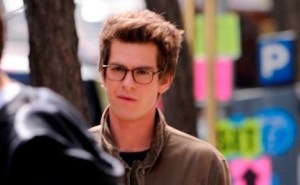 There’s a future blog post about geek chic in here somewhere, and one day I’ll get the time to sit down and thrash out an exploration of cinematic nerds throughout the history of the world. For now, here’s a brand new one to lavish attention over.

Yes, it’s Andrew Garfield in full-on geek mode as Peter Parker aka Spider-Man. So far we’ve only had a few specs-less shots of Garfield on the set of The Amazing Spider-Man, as well as some rather gorgeous looks at him in the texture-y new Spidey suit. But finally here he is rocking some seriously cool frames. Being a geek never looked so good.

…and then you die

, so the saying goes. Talking of misery and pain, I can’t help but wonder if the new Straw Dogs movie – hitting screens this October – will have the guts to champion the same grubby, grainy aura that made Sam Peckinpah’s original ‘70s shocker such an uncomfortable watch.

That film was banned for nigh on 10 years here in the UK thanks to its controversy-courting rape scene and claret-soaked violence. But you certainly can’t tell from these new stills that Rod Lurie’s remake wrestles with the same issues of marital discord, sexual assault, and unimaginable violence. With James Marsden grinning away like a cheshire cat and Alexander Skarsgård looking seriously buff, you’d be forgiven for mistaking this as a new three-wheeler romantic comedy.

course, this is the PRs toying with us before more horror-inclined images are released. And hell, I’m game. The question remains, though: can director Lurie – who’s got a string of little-known thrillers to his name – really contend with Peckinpah’s notorious original? He’s not promising a masterpiece, but he’s smart enough to admit he can’t trump the ’70s version…

“It’s a fool’s errand to try to outdo Peckinpah on his turf… This is not a soft movie. People leave this movie saying they need a drink.”

Cheers to that. Images via EW.

What’s Cabin In The Woods, you ask? If you’re asking that – fie! Fie and shame! A new-except-it’s-not-really-new-because-it-was-shot-in-2009 horror movie from Buffy pals Joss Whedon and Drew Goddard (the latter also wrote Cloverfield), Cabin is a post-modern chiller set, uh, in the woods. Where bad stuff happens. Like screaming and blood-letting.

That’s about all we know for the moment. Except that it’s going to be awesome, because how could it not be? We should know more very soon, though, because Cabin’s finally been snapped up by Lionsgate for distribution after sitting in a film canister for over a year (it was caught up in MGM’s undignified financial crisis).

Though a release date’s yet to be set, it’s looking likely that Lionsgate will unleash Cabin in October – the slot that they usually reserve for their latest Saw movie. Cue butterflies in stomach, fainting fits and Friday The 13th marathons.

Previously Whedon had this to say about the film:

“It’s an old fashioned horror movie, it does involve young people going out into a cabin in the woods, which is never a good idea, but it’s also me and Drew Goddard sitting around with our thoughts about why we love these movies, and what’s weird about them and what’s awesome, and I think it’s very original.“

So essentially it’s sounding like a Scream-esque take on wood-set slashers. Hopefully. And if that doesn’t get your juices flowing, nothing ever will.