If a film’s poster is reflective of its quality, then Straw Dogs falls spectacularly at the first hurdle. The artwork for the remake of director Sam Peckinpah’s same-named 1971 invasion thriller (itself adapted from Gordon Williams’ novel The Siege Of Trencher’s Farm) forgoes originality to instead rip off its forebear – except now it’s James Marsden donning smashed glasses instead of Dustin Hoffman.

Marsden plays David Sumner, a Hollywood screenwriter who moves to a backwater town with his wife Amy (Kate Bosworth). Here he hopes to finish a tricky script he’s been working on. That’s almost impossible, though, when the rowdy locals get a little too friendly, among them a gobby retired football coach (James Woods) and Skarsgård’s burly builder, who’s dead set on reigniting a decade-old flame with Amy, his high school sweetheart.

The copy-don’t-create philosophy of Straw Dogs’ artwork permeates the rest of director Rod Lurie’s unnecessary, connect-the-dots redo. Its cast list may have been considerably sexed up – both Alexander Skarsgård and Marsden are strapping, bronzed specimens – but Lurie apes Peckinpah’s Dogs to such a degree that he completely discredits his film’s entire existence.

Cynically, the director hits all the expected beats, producing something that feels both lazy and dated. The original’s controversial rape scene is misplaced in a film keen to play it safe, while the final act showdown brings the requisite blood, but merely re-stages the ’71 siege in simmering HD – they even have the gall to copy the DIY weapons. The one thing that can’t be faulted is the performances, with an on-fire Woods – all gnashing teeth and berserk – giving it his all, and Marsden convincing as a mild-manner writer who does what he has to to protect his home. Where Peckinpah’s film was a genuine video nasty, though, Lurie’s should be left to the dogs. 1/5

…and then you die

, so the saying goes. Talking of misery and pain, I can’t help but wonder if the new Straw Dogs movie – hitting screens this October – will have the guts to champion the same grubby, grainy aura that made Sam Peckinpah’s original ‘70s shocker such an uncomfortable watch.

That film was banned for nigh on 10 years here in the UK thanks to its controversy-courting rape scene and claret-soaked violence. But you certainly can’t tell from these new stills that Rod Lurie’s remake wrestles with the same issues of marital discord, sexual assault, and unimaginable violence. With James Marsden grinning away like a cheshire cat and Alexander Skarsgård looking seriously buff, you’d be forgiven for mistaking this as a new three-wheeler romantic comedy. 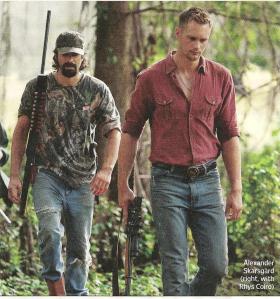 course, this is the PRs toying with us before more horror-inclined images are released. And hell, I’m game. The question remains, though: can director Lurie – who’s got a string of little-known thrillers to his name – really contend with Peckinpah’s notorious original? He’s not promising a masterpiece, but he’s smart enough to admit he can’t trump the ’70s version…

“It’s a fool’s errand to try to outdo Peckinpah on his turf… This is not a soft movie. People leave this movie saying they need a drink.”

Cheers to that. Images via EW.