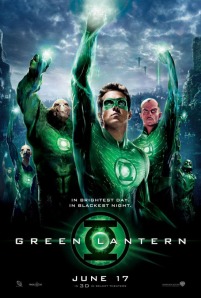 Briefly: there’s a new poster out for Green Lantern. And much like all the other promotional material for the film, it’s not exactly set my world aflame with nail-chomping anticipation. With news arriving this week that the film’s received a budget boost of $9m to fix its special effects (that’ll teach them for robbing Ryan Reynolds of a real super-suit), it looks like the debate over just how bad Lantern could be is going to rage on right up to its 17 June release date.

Admittedly, I have the same concerns for Lantern as I did for Thor (which, actually, I ended up really liking). Namely that all the crazy CGI and space-y stuff will feel too hokey when set down next to a modern-day Earth setting. That said, it does have some pluses going for it – Blake Lively impressed with The Town (tonally a million miles away from Lantern, true), Ryan Reynolds can be charismatic if he checks the goofy gurning at the door (see Buried), and director Martin Campbell is definitely no hack (he gave us Casino Royale and GoldenEye, but he also gave us the woeful Edge Of Darkness).

In short: jury’s still out concerning whether or not Warner Bros can turn Lantern into a massive money-maker while delivering something of franchise-birthing quality. But based on promo work like this, which is just too Photoshop-heavy for my taste, we’re still in for a very rough ride.