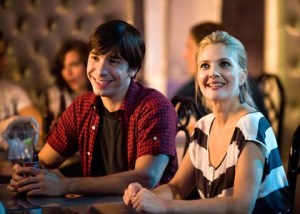 Skype. Facebook. iPhones. GPS. We have never been more connected. But, asks Drew Barrymore’s chin-stroking new flick Going The Distance – dubbed an “edgy comedy” by its director Nanette Burstein – is all this new technology helping to build relationships, or is it just making things worse?

Promising a grittier take on the romcom mould, documentary filmmaker Burstein wants to bash vapid, eye-achingly polished ‘chick flicks’ into shape with Very Modern Issues™. “Tonally it’s more akin to Knocked Up than The Proposal”, she says of her fiction debut. What sort of VMIs are we dealing with? Well, real-life couple Barrymore and Justin Long play a journo and music exec who attempt a tech-enabled long distance relationship. Cue pining, Skyping and (naturally) phone sex…

“It’s kind of a high concept,” nods Ron Livingston, who plays Long’s boss. “Is it possible to have a relationship via all these new toys and tools? At the end of the day you’re still in different places.”

“It felt very real, this is the dynamic of men and women,” Barrymore explains. “The humour isn’t that sort of Three’s Company, misunderstandings, girl-in-distress comedy.” As for playing yin to real-life beau Long’s yang, the actress is typically non-affronted. “Knowing someone creates an honest chemistry,” she says. “That’s something to capitalise on, not to be afraid of.”

Alright, so can long distance actually work in our tech-savvy age? If you’ve been in a city-hopping tryst, you probably already know the answer. And Barrymore? “I used to be obsessed with happy endings,” she muses, “but more and more I’m liking the stamp of reality that feels really pertinent and accessible to my own life.” Get the tissues ready…

Do you know what PC load letter means?
It means the paper tray on the computer’s empty and needs to be loaded with letter sized paper. That’s what I made up! I don’t know for sure.

Has a bullet ever been fired at you?
Not that I’m aware of! If it did, it missed!

Would you break up with somebody using a post-it note?
Not at this point. At least Berger left a note! That’s probably one post-it note better than a lot of guys…