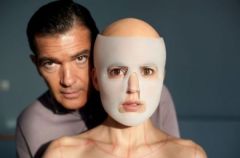 Pedro Almodóvar has built a successful career out of making films about complex female characters, positioning them at the centre of colourfully eccentric movies that are often as outrageous as they are opulent. The Skin I Live In is no different.

Antonio Banderas plays Robert Ledgard, an accomplished surgeon who’s escaping his troubled past by experimenting on cultivating a tougher kind of skin. Helping him in this venture is the mysterious Vera (Elena Anaya), who Ledgard has locked in his home for reasons that gradually become clear.

Many of Almodóvar’s favourite elements are present and correct – sex, music, violence, sly humour and vivid colours. But any comparisons with his earlier work only skim the surface of a film that reveals itself layer by layer. As the mystery unfolds, there’s little of the screaming melodrama you expect of Almodóvar. Instead, he uses a lush musical score and a steady pace to deliver a story steeped in melancholy.

Most of all, this is a genuinely unsettling treaty on revenge, gender and grief. Almodóvar’s always nudged the boundaries of gender representation, and here he snaps the restraints entirely. The film’s central nuclear bomb of a twist will divide audiences, but Almodóvar handles the story with such care that it delivers as a sensitive and sad rumination on identity and loss. He also does for Banderas what he did for Penelope Cruz with Volver, gifting him a fascinating role in his native Spanish, over 20 years after the pair last worked together. Inscrutable, cruel and obsessive, Banderas hasn’t been this ‘on’ in ages.

The Skin I Live In is never easy viewing and its subject matter is tricky at best, almost too extreme at worst. But it’s never anything less than 100% involving – a fearless stab at brain-busting storytelling. 4/5