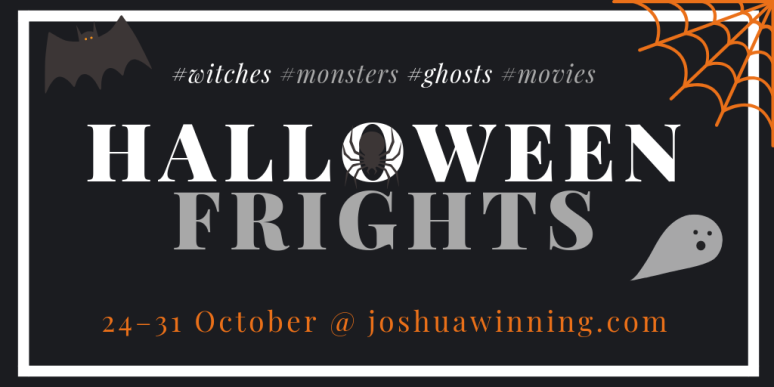 It’s day seven of #HalloweenFrights, and today I’m drawing the bedsheets up to my nose as CJ Tudor prepares to chill us with her horror origin story.

CJ wrote this year’s bestselling smash-hit The Chalk Man (Penguin), and I’ve just been lucky enough to read a proof of her new novel, The Taking Of Annie Thorne (Penguin, February 2019), which was even more gripping and scrape-under-skin unsettling. So here’s how CJ became horror’s number one fan…

I first realised that I liked to be scared around the age of eight.

I grew up on Enid Blyton – the magic Faraway Tree, Famous Five and Mallory Towers – but suddenly I found myself perusing the library for something different… something less scones and ginger ale and more spooks and chills.

There wasn’t a lot on offer in the children’s section back then so one of the first scary books I read was Hamlyn’s Book of True Ghost Stories Fact or Fiction. It gave me nightmares for weeks but I still found myself drawn back to it again and again.

Around the same age I’d go around to my friend Kirsty’s house to watch videos. My parents didn’t have a video recorder but Kirsty’s parents had a Betamax (oh yes!) plus they were fairly relaxed about what we watched. It was here, curled up on beanbags together that I was introduced to An American Werewolf in London, Poltergeist and, later, The Evil Dead.

However, my true revelation came when, aged twelve – and now armed with my dad’s library card – I picked up a battered copy of Christine. That was it. I was addicted. I sought out more and more King, and Herbert, Koontz and Barker quickly followed.

But WHY did I love horror so much?

I think all kids are attracted to dark things, the lure of the forbidden. Children are also pretty revolting. They’re fascinated by bodily functions, blood and poo and scabs. There’s always one child who takes a delight in pulling the legs off grasshoppers (my friend, Kirsty, again). And we’re brought up on stories about wicked witches, monsters and ghosts.

I was also a teen during the golden age of horror. King, Herbert and Koontz ruled. The garish covers glared out from every book store. Terrifying but oh so tempting. And then there were the films – Halloween, Carrie, The Shining.

Horror informed what I read, watched and wrote. I continued to love horror even when it fell out of fashion. I remember, when I first began submitting my work to agents, one telling me that my mix of creepiness and crime was not what publishers wanted. Horror was a dirty word in the book world.

I’m thrilled that that seems to be turning around. After all, horror has always remained hugely popular in TV and film. People like to be scared. Horror enables you to peek through your fingers at something bad from the safety of your own sofa (or behind it). The monsters and the gore are contained. And usually, good wins out.

Horror was last big in the ’80s – a time when there was a lot of fear in the world. Nuclear holocaust, the cold war. I think it’s no coincidence that it is making a resurgence now, a time that’s once again troubling and uncertain.

When there are very real human monsters and conflicts that are not so easily resolved there’s a certain reassurance in watching a man in a hockey mask meet his comeuppance at the hands of a gutsy heroine.

So, in a weird way, I suppose I love horror because I find it comforting. And just a bit scary.

Thanks so much for that, CJ. You can follow CJ on Twitter here. Sadly, tomorrow is the final day of #HalloweenFrights, boooo. But don’t worry, we’re going out with a bang as another of my favourite horror authors descends on the site with ghostly goodies.

Have you enjoyed the series? Want to see more things like this on the site? Let me know on Twitter here!