It’s day four of #HalloweenFrights, and I’m excited/terrified to welcome author Troy H. Gardner to the site. At this time of year, there are a LOAD of lists that attempt to uncover the best/scariest/most amazing scenes in horror movies EVER, but, trust me, Troy knows his stuff. When he says these scenes are awesome, I believe him. Take it away, Troy…

As a lifelong horror fan, co-author of gay horror Camp Carnage, and author of Moments From A Stolen Year, here are 10 of my favourite horror movie moments. And by ‘favourite’ I mean I’ll kick myself later when I think of 30 more that should have been included (like something from the ’90s). Be warned: some of these venture into deep spoiler territory. Since ranking these is impossible, I’m placing them in order of their release date. 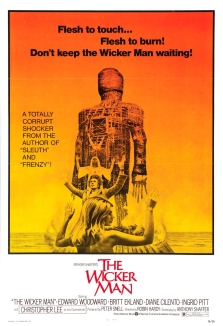 1. The Wicker Man (1973)
Moment: Sargent Howie’s fate
Talk about a culture clash. The entire film leads perfectly to the deeply unsettling burning of the wicker man and Edward Woodward’s defiant death wails drowned out by Christopher Lee’s pagan flock is a sight to behold.

2. Phantom of the Paradise (1974)
Moment: Cooked Beef
This glam rock reimaging of the Phantom of the Opera centers on a musical retelling of Faust, and when we finally see the production at the Paradise, it lives up to the hype. In “Somebody Super Like You/Life At Last” we have a staged production rocking Caligari fierceness in set design and makeup, and then Beef’s electrifying end. It’s high energy camp horror entertainment at its best.

3. When A Stranger Calls (1979)
Moment: The first twenty minutes
The opening was scripted and shot as a complete short film, but after Halloween’s success, producers created the rest of the film and tacked it on, which explains why the opening feels like a complete story in itself. Of course it’s based on the well-known urban legend “The Babysitter and the Man Upstairs”, but it’s all in the execution. Big-eyed, sweet-voiced Carol Kane plays a babysitter who’s terrorized by disturbing phone calls. Years later, Scream did a more than memorable recreation with Drew Barrymore, but you can’t beat the original.

4. Sleepaway Camp (1983)
Moment: The whole freakin’ ending
The film is this strange, giallo-esque slasher mystery with actual teens playing teens (what a crazy idea), and as much campy fun is had, it’s that coocoo bananas ending that solidified the film’s legacy and created a franchise ripe for further entries. The whodunnit aspect works well enough to whittle down suspects until we’re left believing the killer has to be short fuse Ricky or his painfully shy cousin Angela. Once Ricky’s beaten by a chimpanzee-like raging camp owner, it’s all too obvious that Angela’s the killer. Then comes that infamous reveal when the counselors find Angela on a moonlit beach cradling nice boy Paul’s head.

5. Phantasm 2 (1988)
Moment: Father Meyers’ death
Oh man, there’s so much to love across the entire Phantasm series, but I’m especially partial to the priest’s death in the first sequel. Kenneth Tigar is a phenomenal actor who instills real pathos in the drunk priest struggling with demonic aliens digging up and reanimating corpses (typical, right?) and his exchange with the always intimidatingly magnetic Angus Scrimm’s Tall Man is perfect. And the Tall Man lefts him go, only to get drilled in the head by a flying sphere.

6. Child’s Play (1988)
Moment: Chucky reveals himself to Karen (and the audience)
Obviously Chucky’s a killer doll and by now we’ve seen him running around for six sequels and counting but the original movie played it close to the vest. It even toys with the idea that Chucky is just in Andy’s imagination, harking back to earlier iterations of Don Mancini’s screenplay. We’re pretty deep in the movie and invested in the characters, and then comes the big reveal scene and it’s entirely worth the build-up. Catherine Hicks plays it flawlessly and Kevin Yagher’s behind-the-scenes animatronics were so great she married him.

7. Freddy Vs. Jason (2003)
Moment: Freddy Vs. Jason
The movie may have its flaws (what film doesn’t?) but the entire film is based on the simple concept of two slasher icons going at it, which fans had clamored to see for over a decade, and it delivers. The fight is fun, intense, and allows both boogeymen to come out victorious depending on how you look at it.

8. Hatchet (2006)
Moment: The Parmettos’ murders
When I saw this in theaters after zero hype, I knew they’d created a new slasher icon the moment Victor Crowley appears. He’s brutal, he’s terrifying, and his debut scene is bloody fun. He hatchets Richard Riehle to death and then proceeds to tear a middle-aged, track-suit wearing woman’s head in two during a gorgeous circular tracking shot.

9. Dude Bro Party Massacre III (2015)
Moment: The recap of Dude Bro parts 1 and 2
This gory satire is the ‘lost’ third entry in a supposed 1980s slasher series, so to get the audience up to date, there’s a fantastic recap sequence in which the final boy from the first movies tells his therapist about all he’s survived. It’s fast, bloody, funny, expository, and includes a Larry King cameo as Coach Handsy.

10. Boarding School (2018)
Moment: Jacob descends the stairs
Man, I love this movie. Can’t recommend it enough. And since it’s not decades old, I’ll be vague with this one. After a fiery climax, our protagonist makes a powerful decision and then walks down the stairs in a beautifully shot sequence framed with a stained-glass window and a surprisingly playful score. Like with the Wicker Man, it’s a moment the entire film leads up to and is both brutal and unavoidable.

Thanks Troy! If you haven’t been scared away already, be sure to follow Troy on Twitter. And come back tomorrow for more spooky happenings, this time from an author who knows how to cast a sinister spell…