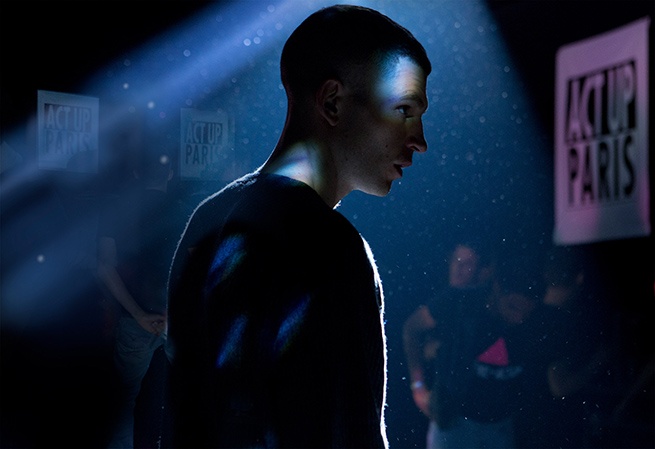 In 1992, Robin Campillo joined a militant group of activists called Act Up Paris. Dedicated to battling government apathy towards the AIDS epidemic, Act Up Paris did everything it could to grab headlines and make its cause visible, no matter what the cost, in an era when the supposedly ‘gay disease’ wasn’t taken seriously.

The group’s spitfire spirit crackles through Campillo’s third feature film, 120 BPM, which is partially inspired by the French director’s time with Act Up, and sheds new light on gay militance in a time when LGBTQ+ people are enjoying more freedom than ever. The film’s plot follows a number of the group’s members, cleaving particularly closely to HIV-positive extrovert Sean (Nahuel Pérez Biscayart), and his growing closeness to new member Nathan (Arnaud Valois). Among the many other activists, all of whom get their moment, there’s a mother and her 16-year-old son Marco (Theophile Ray), who’s a haemophiliac and contracted the AIDS virus from an infected blood transfusion.

At two and a half hours long, Campillo’s film could have used a little judicious editing, but the freewheeling style and realistic delves into the group’s rowdy lecture-hall meetings are hugely seductive. As its title suggests, 120 BPM pulses with passion and anger on numerous levels. At times, it feels like an exorcism for Campillo, who lived this, and has lived with it for over 30 years. There’s hope, though, too. The sparse musical segments are euphoric, while the sense of community is warm and invigorating. For those who have watched How To Survive A Plague, 120 BPM offers a nourishing and rousing insight into gay activism outside of the US, and won’t be forgotten in a hurry.