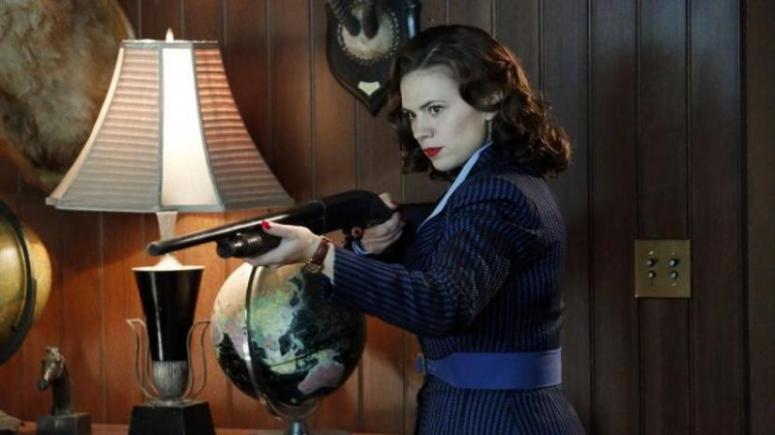 There’s been a lot of chatter over the past few years about Marvel’s inability to release a female-led superhero movie. Despite having a roster of comic-book superheroines prime for a trip to the big screen, the studio won’t unleash its first female-led movie until Captain Marvel debuts in 2018. Thank heavens, then, for Agent Peggy Carter. She may not possess super-powers or a snazzy super-suit, and she may not be in cinemas, but with her sharply written and hugely entertaining TV series, she proves what we’ve always known – Marvel women are more than a match for their male counterparts.

Created by showrunners Christopher Markus and Stephen McFeely, Agent Carter is set in 1946, three years after Steve Rogers aka Captain America (Chris Evans) disappeared in the Arctic. Attempting to get on with her life, Peggy Carter (Hayley Atwell) works at the Strategic Scientific Reserve (SSR) in New York City, a pseudo-detective agency where she’s frequently undermined or just plain ignored by her male colleagues. When madcap inventor Howard Stark (Dominic Cooper) is accused of selling deadly weapons on the black market, he becomes a “fugitive from justice” and asks Carter for help clearing his name. Pretty soon, she’s drawn into a plot involving terrifying technological gizmos, undercover assassins and Russian mind manipulators.

What’s most impressive about Agent Carter’s eight-episode first run is how confidently it hits the ground running. Its opening moments set the tone as Carter kicks ass and cleans house, all to the foot-tapping neo-jazz of Caro Emerald, and the show’s mission statement is clear: we’re here to have fun, take names and revel in the period detail. Much of that early confidence is down to Atwell, more than comfortable in the role, with this being the fourth time she’s played Carter (after appearances in her own Marvel One-Shot short, she also turned up in Agents Of S.H.I.E.L.D. and Captain America: The Winter Soldier before reprising Carter in Avengers: Age Of Ultron and Ant-Man).

“I’m capable of handling whatever these adolescents throw at me,” she says in episode one, and we’re never in any doubt of that. Sharing sparky banter with the other agents, who treat her like a secretary, she’s a woman constantly coming up against the brick wall of patriarchy. That she handles it so pragmatically is part of Carter’s charm, and she’s genuinely likeable – a grounded heroine who doesn’t need super-powers or (gasp!) a man to rescue her. Her friendship with waitress Angie (Lyndsy Fonseca) adds an interesting wrinkle, too – this may be a show about a woman’s fight against patriarchy, but it’s also about one woman empowering other women.

There’s one quite conspicuous man whose presence is felt throughout, though. That Agent Carter opens with a replay of the climax of Captain America: The First Avenger is fitting; the ghost of Steve Rogers haunts this first season. Carter never refers to him as “Captain America”, and her grief over the man behind the shield threads every episode with sadness. Carter is struggling to accept Rogers is gone, and her emotional response to uncovering a vial of his blood is hugely moving. It’s these moments of affecting fragility that gift the series vital humanity as it crashes through noir-ish conspiracies and action set-ups.

In fact, for all the explosions and whirlwind fights, it’s Carter’s relationships with the other agents of the SSR that carry the most impact. Over the course of the season, she butts heads with swaggering Jack Thompson (Chad Michael Murray), shares a bond with crippled war vet Daniel Sousa (Enver Gjokaj) and is constantly infuriated by SSR chief Roger Dooley (Shea Whigham). All are alternately her foes and her friends, and there’s a constant undercurrent of tension in their scenes, especially as all three men are determined to bring Howard Stark to justice – which would also mean exposing Carter as a double agent.

Speaking of, Dominic Cooper is brilliant as the playboy inventor. Though his appearances as Stark are kept to a minimum, he’s a bright addition to any episode (even if his American accent occasionally comes off like Nathan Lane after a few G&Ts) and the perfect foil for Carter, his womanising ways never failing to rub her up the wrong way. On the flip side, his butler Edwin Jarvis (James D’Arcy) becomes Carter’s partner and confidante, and the pair’s burgeoning friendship forms much of the show’s emotional backbone. Showrunners Markus and McFeely wisely keep Carter free from romantic entanglement, instead exploring the men in her life as anything but love interests. Some are her equals, some her inferiors and superiors, but all tease out different aspects of Carter’s personality, affording us a varied insight into the woman Steve Rogers fell for.

Not that the action isn’t thrilling. Like this year’s Man From UNCLE reboot, Agent Carter has great fun with retro tech. Between a self-typing typewriter and boxes full of Stark’s weird inventions, there are cool gadgets aplenty, and many of the episodes revolve around what craziness each new gizmo will unleash. Atwell’s game for the action, too, taking demanding fight scenes that wouldn’t look out of place in a Bourne film in her stride. She’s clearly having great fun in the role, dressing up in silly disguises (blonde wig, lab coat) and delivering pithy one-liners with a delicate touch. Whether trading quips with Stark or reminiscing about Rogers, she’s just fantastic.

It’s rare for a TV series to deliver such exceptional entertainment in its first season, but Agent Carter makes it looks easy. Unlike sister series Agents Of S.H.I.E.L.D., which wobbled during its early episodes before finding its feet at the close of its first year, Agent Carter starts off strong and only gets better as the season’s arc unfolds. Meticulously planned, it tells a proper, self-contained story, impressively sure of its world and characters. It’s as close to a person first season as it’s possible to get.

And with season two of Agent Carter relocating to Los Angeles, it’s clear showrunners Markus and McFeely are keen to keep Atwell busy with new and interesting challenges. That’s been a hallmark of the show throughout its impressive first season. Its breakneck pace keeps the kicks coming, but some fantastic twists also ensure it’s almost impossible to predict where the complex plot will go next – as with one shock character demise. And though it’ll be sad to lose gorgeous ’40s New York as a backdrop next season, it feels right that Agent Carter will go on to explore new territory. She’s earned her wings, now let’s see her fly.