It’s been 10 years since the Halliwells hung up their brooms, so I’m heading back to San Francisco to see if Charmed‘s special brand of supernatural entertainment still casts a spell… 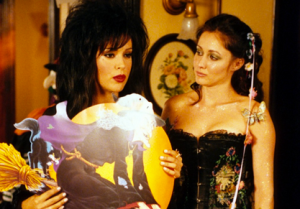 It took them a couple of years, but Charmed finally delivered a Halloween episode with this devilishly entertaining third-season cacklefest. Mixing in time travel and resurrected baddies, ‘All Halliwell’s Eve’ accomplishes a neat trick in furthering the Cole/Triad arc, paying tribute to the Halliwell’s history, and digging into the fundamentals of witchcraft – all while giving Alyssa Milano an excuse to dress up (again).

You could never accuse Charmed of being slow, and ‘A Halliwell’s Eve’ stuffs its 40 minutes fuller than a fresh pumpkin pie. The sisters find themselves all dressed up with nowhere to party when, on their way to a Halloween bash, they’re sucked into a time portal and dumped in the 1600s. Targeted by witch hunters, they attempt to rescue a young pregnant woman from the clutches of witch Ruth Cobb (Judy Geeson). But unbeknownst to them, Ruth’s in league with Cole, who’s also taken a little trip down memory lane in an attempt to wipe out the Halliwell line for good.

Given it had never tackled Halloween before, Charmed wastes no time playing with the festive witch gags here. Piper freezes a demon using a plastic wand, while Phoebe both worries about outdated stereotypes and dresses up as Elvira. (Leading Prue to pithily observe: “I am so impressed that you can make a protest statement and show cleavage all at the same time.”)

Meanwhile, the episode niftily finds ways to further the season’s overall plot (read: Cole on the war/smoochpath) while delivering a cracking standalone. When it’s revealed that the pregnant woman is in fact the girls’ ancestor – and the mother of Melinda Warren – the episode takes on a whole new edge, reaffirming that the reason Charmed was great even during its patchier years was that it put family front and centre.

Speaking of, Leo and Darryl are as much a part of the Charmed family as ever here, finding themselves trapped in the Manor with a couple of Grimlocks (gurning like they’ve eaten too many toffee apples). While the Grimlocks are lousy foes, they give Brian Krause and Dorian Gregory an opportunity to buddy up for the first time in three years, having shared very little screen-time previously. (They both look pretty sharp in their uniforms, too, but that’s besides the point.)

Less interesting is Prue’s flirtation with a strapping villager, and the episode’s suggestion that she’s somehow fated to be with him seems wasted when he’s never seen on the show again. Still, the fun here is in the girls getting reacquainted with old magic, finding it in apples, broomsticks and, yes, even a conical hat. Phoebe’s jubilant flying broomstick moment (talk about a coming out) is hampered by dodgy special effects, but the rest – Piper’s Glenda The Good Witch costume, the Leo/Darryl banter, Cole’s deepening conflict – is fantastic. A bit of a treat, you might say.

Missed an episode? Catch up on the other Charmed Rewitches here.