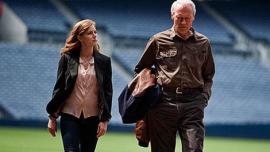 Where Brad Pitt’s pic was all about modern tech, Trouble With The Curveargues that “anybody who uses computers doesn’t know a damn thing about this game”.

It’s sentiment over cynicism as Eastwood’s scout butts heads with daughter Mickey (Amy Adams) in a by-the-numbers drama that uses baseball as set-dressing.

Humdrum plotting aside, Robert Lorenz’s directorial debut shows that Eastwood’s still got it – a graveside sing-a-long guarantees sniffles – while Adams is a fiery Lois Lane in embryo. 3/5