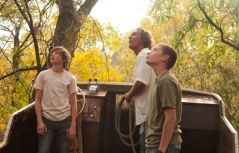 A coming-of-age drama that dirties up genre conventions with surprisingly adult concerns, Mud is the third feature from Take Shelter director Jeff Nichols. It also contains the latest in a string of increasingly solid turns from Matthew McConaughey, who emerged from his rom-coma around 2011 and is finally fulfilling the promise of 1996’s A Time To Kill.

Though Mud is named after McConaughey’s character, a grubby loner living in self-imposed exile on a remote Arkansas island, it’s the fuse that Mud lights in 14-year-old Ellis (Tye Sheridan) that gives the film its impetus. The pair meet when Ellis and best bud Neckbone (Jacob Lofland) head to the island in search of a boat left in a tree by the last flood.

There, they find Mud. Superstitious, romantic, a teller of tall tales, he’s in the middle of hatching a desperate plan to get back his love, Juniper (Reese Witherspoon), while evading the targets of vengeful bounty hunters. Resolving to help Mud out, Ellis and Neck become his willing aids. But could Mud be more dangerous than he’s letting on?

Told almost exclusively from Ellis’ point of view (there are only a handful of times that the audience is granted access to conversations that Ellis isn’t), Nichols’ take on the traditional coming-of-ager is an affecting, poetically-lensed exploration of how a teenager’s ideals don’t match those of a complex, contradictory adult world.

Example: Ellis’ certainty that Mud and Juniper belong together, which is both unquestioning and naive. “They love each other,” he tells neighbour Tom (Sam Shepard), and it’s no coincidence that Ellis’ own parents are on the brink of divorce. This idea of love and heartbreak beats through Mud, and it’s never more poignant than in Ellis’ puppy-dog affection for an older teen whose growing apathy he can’t understand.

For his part, Sheridan perfectly captures Ellis’ inner struggle, imbuing his thoroughly modern Huck Finn with pluck, warmth and not a little frailty. He’s as naturalistic as he was in The Tree of Life (Nichols himself shares that film’s love of gorgeous nature shots), and Sheridan’s relationship with Lofland’s comic-relief swear machine is just one of the many elements that keeps Mudrooted in a relatable reality.

As well as Huck Finn, there are also echoes of last year’s Beasts of the Southern Wild, another tale centred around a youngster’s attempts to understand a discombobulating world while living in ramshackle riverside humility. While Mud doesn’t stray into the same fantasy-hued terrain as Beasts, they’ll make for a fantastic double bill one day.

Really, there are few stumbles in Nichols’ film, which forgoes the all-out crazy of Take Shelter for something slower and more intimate. It’s a film about family and love; themes that McConaughey brilliantly encapsulates in his chip-toothed anti-hero. Baked hard by the sun, he’s as much of a kid as Ellis; the world’s chewed him up and spat him out again. He’s everything Ellis wants to be, and everything he shouldn’t be. It’s this clever gambit that Mud enjoys toying with, and the result is an immersive drama that skips ‘adult rite of passage’ cliché by striking a killer blow to the heart. 4/5