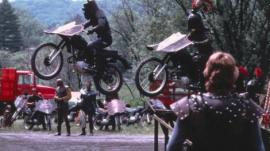 “It’s unlike anything George did or has done.” No kidding! Sandwiched between Dawn Of The Dead and Day Of The Dead (via Creepshow), George A. Romero’s medieval motorbike mash-up is a beguiling blend of two-wheelers and tantrums.

Harris is riveting as the king of a medieval re-enactment troupe whose disillusionment and fiery temper threaten to tear his kingdom apart.

At 145 minutes we’re firmly in epic territory, an ideas-stuffed dissection of society with added bike-duels for kicks. 3/5