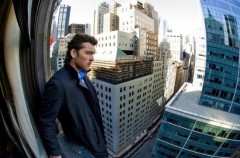 New York. The Roosevelt Hotel’s twenty-first floor. Nick Cassidy (Sam Worthington) has some breakfast. Wipes the room of prints. Writes a suicide note. Opens the window. And steps out onto a ledge… When it comes to grabbing an audience’s attention, nothing does it quite like a bloke threatening to throw himself off the top of a Manhattan high-rise. It was true in Henry Hathaway’s 1951 drama Fourteen Hours, and it’s true for Man on a Ledge.

Except where Hathaway’s film earned plaudits for its portrayal of a man (Richard Basehart) grappling with his own inner-demons, Ledge has its sights set on less torturous thrills. Released a whole six months before the summer blockbuster season kicks off, it’s the first popcorn thriller of 2012. Worthington’s not even given a chance to scream ‘I’m gonna do it!’ before we’re treated to shaky-cam car chases, explosions, jail breaks and Ed Harris sneering away as a slithery scoundrel.

In an age when blockbusters are often suffocated by their bloated storylines, though, the plot of Danish director Asger Leth’s thriller is refreshingly straightforward. Stirring in the biggest of big movie themes – redemption and revenge – we discover that Cassidy is an ex-cop wrongly convicted of a crime (aren’t they all?). But his gamble with gravity is merely a diversionary tactic as his brother Joey (Jamie Bell) embarks on a diamond heist nearby.

Thrown into that mix is Elizabeth Banks as a police negotiator attempting to talk Cassidy down, while on the ground is Kyra Sedgwick as a Gale Weathers-like reporter whose final line is the film’s most gloriously ridiculous. Because, yes, Man on a Ledge is ridiculous, but the fact that it’s so acutely aware of that is what just about saves it.

This is pure bubblegum entertainment. Winking and nodding in almost all the right places, Leth coaxes out moments of genuine hilarity – in particular a snapshot in which desperate women brandish ‘Jump into my arms!’ placards. Sure, the film’s impractical heist logic doesn’t hold a crowbar to Ocean’s Eleven (air vents in air-tight vaults? Thieves who don’t wear gloves?), but the combined magnetism of its spot-on cast – not to mention Leth’s impressive, soaring cityscapes – gives Ledge a winsome kind of charm.

There are certain inexcusable shortcomings, of course. Though it’s nice to have a low-budget thriller come out of Hollywood, the flick occasionally suffers from those slight production values, and poor Elizabeth Banks struggles to escape the restrictions of her underdeveloped soap opera character.

Ledge also oversteps the mark in its final act, and the closing scenes are soppy to the point of embarrassment. Only Ed Harris’ viper-like caricature retains bite. His view on so-called ‘jumpers’? “Why don’t these people just shoot themselves in the head?”

Anticipation: Has Sam Worthington finally watched Clash of the Titans, then? 2

Enjoyment: Daft as an old brush but oddly, endearingly entertaining. 3

In Retrospect: A joyfully silly thriller that won’t win any awards for subtlety, but it already knows that. 3