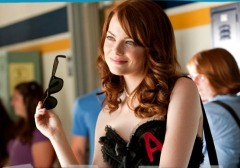 Easily one of the funniest films of 2010, Easy A follows the likes of Clueless and 10 Things I Hate About You as an update of fusty literature that reinvigorates the kind of material that nowadays only gets dusted off for the A-Levels.

A lot of that funny comes courtesy of Emma Stone. Too clued-up to be a mean girl but too pretty to be a member of the breakfast club, she’s a clique-free everygirl who every girl dreams of being. As Olive Penderghast – whose life is turned topsy-turvy when a rumour about her losing her virginity takes on a life of its own – Stone is the kind of spunky, smart-mouthed teen that we usually only see in John Hughes movies.

Hughes is a clear inspiration. Aside from a sweet-but-unnecessary closing boombox moment – and a loving Hughes montage – Easy A strikes out as its own thing. Hilarious, soundtracked-to-the-hilt and super-glossy, it’s sour apple bubblegum with real crackle and pop. And thanks to Stone’s breakout performance, it’s also very, very cool.

Truthfully, at times, just a little too cool. Olive’s parents (Stanley Tucci and Patricia Clarkson) are the kind of down-with-it ‘rents that could only ever exist inside a movie, for example. But in its winsomely kooky characters and caustic wit, none of that really matters. John Hughes would be proud. 4/5