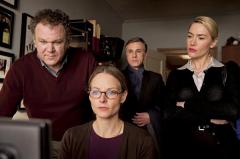 Screaming, crying, vomiting… Roman Polanski’s latest cinematic offering definitely lives up to its determined title. Starring not one but three Oscar winners (and a quartet-completing Oscar nominee in the form of John C. Reilly), Carnage is the Polish director’s first film since he was released from house arrest in Switzerland in 2010, and finds him on typically tidy form.

When their children get into a playground altercation, two sets of parents meet in order to discuss how the situation should be handled. Convening in the plush apartment of the Longstreets (Jodie Foster and Reilly), the Cowans (Kate Winslet and Christoph Waltz) at first accept the blame for their son’s unacceptable behaviour. But as the day wears on and the two couples start to rub each other up the wrong way, all pretences of civility begin to crumble, until they’re all squabbling like the children they’ve met to discuss.

Based on the Tony award-winning play Le Dieu du carnage by Yasmine Reza, Carnage’s stage origins are evident in the film’s sole location – the Longstreet’s fancy New York apartment. With so much star wattage on display, though, any concerns that the single-location conceit might result in a static, patience-testing film are quickly eradicated.

Much of the thrill in Carnage comes with watching so many A-listers playing with smartly-written material that positively crackles with subtext. Reilly in particular impresses, holding his own against more celebrated dramatic actors. Meanwhile, Winslet makes for a surprisingly convincing drunk, and gets some of the best lines. A claustrophobic, ticking time bomb of a dramatic comedy, Carnage excels in depicting four individuals with their own unique neuroses. Shutting them in an apartment together, Polanski cranks up the heat and revels in watching them sweat out their prejudices and imperfections – the resultant carnage is nothing short of riveting. 4/5