Beasts Of The Southern Wild
The Grand Jury Prize dramatic competition winner and TF’s film of the day on Day 8. A gripping, entirely unique creation, Beasts is part childhood fairytale, part enviro-drama, and wholly enchanting. It stars a cast of unknowns, and is the debut feature of director Benh Zeitlin, whose true grit visuals – paired with dreamy narration – are both whimsically arresting and grubbily unpretentious.

Six-year-old Hushpuppy (Quvenzhané Wallis, remarkable) lives in a Delta community known as ‘The Bathtub’, because it’s in constant threat of flooding. When Hushpuppy’s father falls ill, the end of the world seems nigh – especially when the melting icecaps unleash deadly monsters called aurochs. Wonderfully weird and flush with atmosphere, Beasts is a beautifully-lensed, surprisingly savage lullaby.

Indie Game: The Movie
Super Meat Boy, Fez and Braid are the subject of this enlightening documentary – so-called ‘indie games’ created by fanboy joystick-twiddlers who do their stuff outside of the system.

It’s revealed to be a perilous occupation as we get to know the four developers behind those three games, all of whom are variously reclusive, eccentric and super-creative. Thanks to the four developers’ surprisingly frank input, Indie Game works as both an exposé of the booming underground game industry and the tortured creatives behind their conception.

Room 237
One for the Kubrick fans, Room 237 picks apart The Shining in forensic detail, as fans of the film offer their readings of the film’s many possible meanings. Devoid of talking heads, it uses interview chat tracks and footage from other movies (mostly Kubrick’s) to tell its story.

The result is a tongue-in-cheek experiment that lets the interviewees do the talking. Craziest reading of The Shining? One guy’s insistence that it’s an ‘apology’ from Kubrick for ‘faking’ the Apollo 13 landing footage. Hysterical.

Simon Killer
As emotionally volatile as its title suggests, Simon Killer comes from the same creative team behind the phenomenal Martha Marcy May Marlene. It’s not hard to see the through-line. Killer is just as darkly bewitching, presenting a troubled, inscrutable protagonist in Brady Corbet’s Simon, who gets lost in the seedy underbelly of modern day Paris.

Killer pulses with seedy clinches and queasy camerawork as director Antonio Campos explores the darkside of voyeurism with unflinching grit. Meanwhile, it’s got one of the coolest synth-pop soundtracks since Drive. Damn near a modern day Vertigo, Killer will be studied, analysed and discussed for years to come.

Though she’s best known for her caustic wit, Plaza softens off the rough edges while delivering an excess of deadpan goodness. The film’s final act tonal shift will divide audiences, but in general Safety is a hilarious, character-driven film that never takes the easy route. It’ll be interesting to see how they market this one.

Nobody Walks
Olivia Thirlby is the eye at the centre of a very sexy storm in this warm, hysterically funny dramedy. When her young filmmaker breezes into town, she comes riding a wave of effortless sexiness, which carries her through a net of passions-gone-wild as men queue up to fall at her feet.

Though the film could’ve done with more depth, it wisely plays down the angst and is content to sit back as sparks fly between its central players – including Rosemarie DeWitt and John Krasinski. 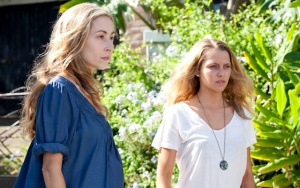 Wish You Were Here
It was completely overlooked at the awards, but Aussie favourites Joel Edgerton and Teresa Palmer definitely deserved kudos for their performances in this hard-hitting homegrown drama.

A beautifully shot traveller’s warning, the film follows what happens when Palmer’s boyfriend goes missing during a trip to Cambodia. Co-writer and co-star Felicity Price tempers a fantastic portrait of Edgerton’s wronged wife, easily stealing the limelight from her better-known co-actors.

West Of Memphis
Produced by Peter Jackson and directed by Oscar-nominated helmer Amy Berg, Memphis goes to extraordinary lengths to (finally) exonerate the Memphis Three – a trio of Arkansas teens who were jailed for murder in the early ‘90s.

Though it’s too long at 150 minutes, we expect a pre-release polish will make Memphis even more powerful than it already is. It haunted us for days.

For A Good Time, Call…
It won’t win any awards for subtlety or heartfelt drama, but Good Time well and truly lives up to that title with some of the snappiest dialogue, broadest comedy and perfectly-timed performances we’ve ever seen in a smutty comedy.

Giving American Pie a run for its money, this laugh riot – which follows two frenemies who move in together and set up their own sex chatline – offered us welcome shelter from a storm of restrained indie love stories that rained down on the fest. And for that we’re very thankful.