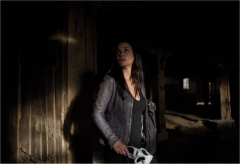 One of the most intriguing things about the Scream Trilogy was that it managed (for a while, anyway) to remain just that: a trilogy. Even if Scream 3 failed to match the stalk-and-kill thrills of its pithy predecessors, director Wes Craven and co stuck to their word and left their franchise as a three-film curio – something even Indiana Jones failed to do. Which makes the belated and somewhat unnecessary Scream 4 (or Scre4m) an interesting proposition: both depressingly inevitable but also undeniably curiosity-baiting. Where can they go from here?

Well, back to the beginning, of course. Notably, Scream 4 represents the first time original director Craven and writer Kevin Williamson, alongside the key battle-scarred trio of Neve Campbell, David Arquette and Courteney Cox, have all worked together since Scream 2. It’s 10 years later in Screamland, and survivor Sidney Prescott (Campbell) is returning to Woodsboro on the first lap of her book tour. There, she finds Ghostface already waiting for her – along with a new cast of nubile young victims, among them Sidney’s cousin Jill (Emma Roberts) and her snarky friend Kirby (Hayden Panettiere).

But that’s exactly Scream 4’s problem; it’s talky and fun, but packed full of ideas that are never put into action. For all its natter of new rules, it cleaves disappointingly to the old ones – characters do dumber than dumb things, certain people are near indestructible and the phone-call-hack-and-slash routine is on rinse and repeat. It’s not hard to believe reports of last minute script changes (courtesy of Scream 3 scribe Ehren Kruger – yes, really).

Worst of all is the treatment of the original trio, who have a mere handful of scenes together, making their presence almost entirely redundant. Gale goes rogue but ends up quickly out of action, Sidney sits about her cousin’s big creepy house and, worst of all, Dewey races around town in his police car like he’s in a really long episode of The Dukes Of Hazzard. Compare the treatment of Sidney, Gale and Dewey in Scream 4 with the treatment of Laurie Strode in the similarly late-hatched sequel Halloween: H20, and you can’t help but see the former as lacking. 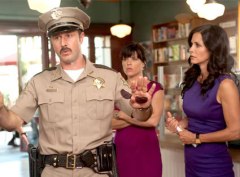 The disappointment doesn’t stop there. Scream 4 is also crucially lacking in the high-octane thrills we expect of the franchise. Though a Stab-A-Thon sequence adds buckets of self-referential zing, there’s nothing here to match the pant-wetting tension of Scream 2’s cop car scene or Gale and Dewey’s sound booth confrontation. The only kill that even comes close to originality is a bloody bedroom brawl that goes to a surprisingly dark, gory place.

Thank heavens, then, for a genuinely shocking climax that effectively pulls the rug out from under our feet. Scream 4 has the best twist since the franchise’s first outing, with an interesting killer whose expected monologue is equal parts terse, timely and terrifying. The unmasking also segues into one of the series’ most out-there scenes – a room-destroying frenzy of manic desperation that I couldn’t possibly spoil here.

In its final 15 minutes, Scream 4 becomes the brave, edgy thriller it’s been straining to be all along. Not to be too harsh on the fourquel – it’s packed full of likable characters and some zippy dialogue (“What’s a four letter word for courage?” asks one cop. “Guts,” answers another, mere minutes before a spectacularly gory death scene). Both Campbell and Cox do fantastic work with limited material (Cox in particular delivers a few well-placed F-bombs), while the feted opening scene is twisted enough even if it fails to break the mould. Though it ends on a high, Scream 4 eventually succumbs to its talk of redundant reboots by becoming disappointingly redundant itself. 3/5