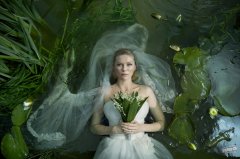 Danish director Lars Von Trier courted scandal at this year’s Cannes Film Festival when he coughed up Nazi soundbites (“I understand Hitler”) during a calamitous press conference. But it’s to Trier’s credit that the film he was over there promoting didn’t get lost in the ensuing, raging squall – Melancholia’s lead lady, Kirsten Dunst, pocketed the festival’s Best Actress award, ensuring the great Dane’s genre-blending oddity stayed defiantly on the event’s radar.

Controversy is clearly Von Trier’s bread and butter (anybody who saw his last film, Antichrist, can attest to that), but if anything, Melancholia is the filmmaker’s most accessible and mainstream movie yet. For a start, it has a linear plot – a mammoth planet, dubbed ‘Melancholia’, has appeared in our solar system, and is fast approaching Earth. But will it collide with us, or drift quietly by? Facing that quandary are sisters Justine (Dunst) and Claire (Charlotte Gainsbourg). The former’s getting married (to Alexander Skarsgård’s Michael), but her growing apathy regarding the ceremony has Claire becoming increasingly irate. And that’s before the invading planet disrupts their lives.

Poignant and punchy, Melancholia has all of Von Trier’s trademarks dialled up to 11 – stark imagery, raw emotion, violent sexuality. Most impressive is the film’s opening 10 minutes, an arresting montage of painterly shots that echoes Kubrick’s 2001: A Space Odyssey. It sets a suitably operative tone, and the following intertwining of dark humour with a creeping sense of dread gives Melancholia a purposeful prowess.

Other plus points include Dunst’s joyful abandonment of her usual teen comedy perkiness to deliver something truly dark and interesting, and one heck of a finale that reverberates right through the film’s closing credits. Melancholia is opulent melodrama at its most memorable. 4/5