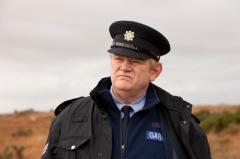 Crass, belligerent and tart, the hero in this delightfully vinegary Irish black comedy really puts the ass in asinine. Not exactly your typical law enforcer, Sergeant Gerry Boyle (Brendan Gleeson) is the titular guard, going about his business with world-weary indifference, interfering with crime scenes and hiring prostitutes for hotel-based fun. When a cocaine ring appears to be doing business out of Galway, though, Boyle is teamed up with straight-laced FBI agent Wendell Everett (Don Cheadle) to round up the dealers.

More than just a case of good-cop-bad-cop, The Guard is a refreshingly witty chuckler that throws irony-laced jibes at its audience like hot potatoes. Gleeson (best known to mainstream cinema-goers as Mad-Eye Moody in the Harry Potter franchise) is a hoot, clearly revelling in playing up Irish clichés (“I thought black men couldn’t swim?” he deadpans) with all the pokerfaced delivery of a seasoned card player. He’s more than just a stroppy baboon, though, sharing heart-warming moments with on-screen mum Fionnula Flanagan, who’s fighting a losing battle with cancer.

And Gleeson’s not the only one having fun. Cheadle’s uptight American is the straight man to Gleeson’s clown, but grabs just as many guffaws. Meanwhile, Mark Strong – ever the Brit baddie – gets some great lines as a drug dealer frustrated with the ineptitude of the Irish cops he’s in league with.

Shot almost entirely in the countrified surrounds of Galway, The Guard has a grubby aesthetic that lends it a cool, understated vibe, while its iconic, blow-out climax is pure cinema gold. Though nowhere near as hardcore or deliriously hedonistic as Nicolas Cage’s 2009 Bad Lieutenant, it offers the same guilty pleasure in watching an authority figure so blatantly playing with fire – and mostly getting away with it. 4/5

Via Out In The City