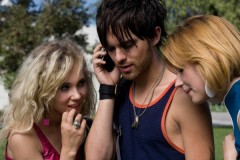 If you’re a fan of whiplash-inducing dialogue, healthy doses of rampant nudity, pretty young things being pretty and films with an ardent sense of the absurd, Kaboom could just be your new favourite movie. Written and directed by Greg Araki of The Doom Generation, it’s a bright, head-spinning ode to youthful frivolity that barely pauses for breath as it screeches from one zany set-up to the next.

A blizzard of post-modern activity keeps Kaboom dashing along at a heck of a lick. Championing whipsmart dialogue and a pleasingly glossy sheen, it’s clear that Araki’s having fun toying with us, chucking in OTT supernatural happenings and sexy daydreams to keep us on our toes. Even the film’s central mystery appears to be one big joke.

Which is sort of where Kaboom comes unstuck. Okay, so nobody stays clothed for more than five minutes. But Kaboom exists in a limbo where few actions have discernable consequences, meaning there’s little to grab a hold of. Even the film’s mystery becomes a farce, with the histrionic climax submitting to knowingly cheesy direlogue and a wilfully silly twist.

Still, to those who’ve been raised on a diet of talky, wise-cracking Diablo Cody movies (Juno, Jennifer’s Body), this will be a welcome distraction. For everybody else, Kaboom could merely lead to a good deal of head scratching and the feeling that maybe you’re a bit too old for all this. 3/5