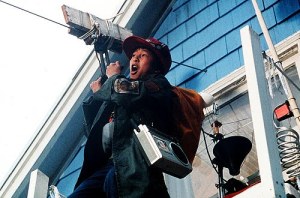 Name Richard Wang
Nickname Data
Hobbies Inventing stuff, talking to himself, mispronouncing words, being generally cheerful and funny.
Worst Moment Data tries out his new sucker-cupped grappling belt on a giant can, but it malfunctions and he ends up head first in the trash… Gah!
Finest Moment Plunging certain doom-like into a rocky tunnel, Data uses his chattering-teeth grappling hook to slow his fall – and dangles suspended above some very spike-y spikes.
Why We Love Him Who doesn’t love an inventor? And the stuff Data comes up with is the kind of stuff we wish we had the wherewithal to create – like the Bondian clothes-line swinger, or the boxing-glove defender, or the slick shoes. He’s also a really spirited little chap. Which must count for something.