Nowadays, people like to say that life begins at 30. Not so in Logan’s Run, which presents a utopian future (the 23rd Century, apparently) where members of society live entirely for pleasure – until they hit their 30th year and are ‘renewed’ (read: blown into smithereens). Making sure that nobody does a literal runner before their time’s up are ray gun-carrying ‘Sandmen’, among them Logan (Michael York), who’s just been drafted in to go undercover and destroy a rumoured sanctuary for those life-loving rebels.

Not that that’s a bad thing. Logan’s Run is old school sci-fi that strikes a perfect balance between spectacle and ideas. Crucially, unlike most modern day fare, Run’s flash and bang is all borne out of the story (apart from the ray guns, they’re just cool). The film’s stand-out stroll through a Washington reclaimed by nature even pips I Am Legend to the post decades in advance, while echoing that classic shocker ending from the original Planet Of The Apes. 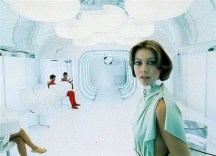 Of course it’s dated – in places quite badly. But while the costume design and fitful bursts of cheesy over-acting are easy giggle-inducers, they also add to the film’s charm. And when you’ve got a hero-heroine pairing as earnest as York and Jenny Agutter, it’s difficult not to get swept into the high camp adventure of it all.

Meanwhile, for those suffering a serious case of CGI and 3D fatigue, Run’s deliciously archaic approach to special effects are a real thrill. From exceptionally-detailed miniatures to beautiful matte paintings and richly evocative lighting effects, Run is a treat for the eyes. There’s also a fantastically grisly set-piece involving a Bondian laser fight and Farrah Fawcett that holds up to the 21st century’s exacting standards.

One of the most interesting things about revisiting old sci-fi is seeing what the filmmakers got right and wrong about the future. While we certainly don’t have ray guns or giant teleporters (yet), Run’s flashy plastic surgery workshop, spliced with concerns about youthful vitality and Big Brother paranoia, show just how relevant the film remains even today. 4/5