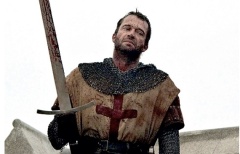 It’s the curse of every post-Gladiator swords-and-scrapper that it has to crawl out from under that film’s hulking shadow. Such is the plight of Ironclad, which should come with its own medieval movie check list. Giant swords? Yep. A gruff, beleaguered hero? Of course. Colossal, bloody skirmishes? Right on. The writers have even chosen a suitably obscure but nevertheless fascinating period of history to recreate, GCSE Bitesize-style (with added body parts) as we follow the fall-out from the Magna Carta’s inception.

The year is 1215. Unruly King John (Paul Giamatti) has been forced to sign the Magna Carta, which guarantees each man freedom unto himself. But Johnny isn’t happy. Bile-filled and raving, he calls on a Viking army to help him regain power – and will spill all the blood he needs to that end. Luckily, Baron Albany (Brian Cox) is having none of it, assembling a band of not-so-merry men to face down the King. Among them are a morally tortured Templar Knight (James Purefoy) and Jason Flemying’s battle-hardened Beckett.

With much of the action taking place at Rochester castle, the last bastion of liberty against King John’s tyranny, it’s all a bit like a period version of Panic Room. After an initial introductory chapter, Ironclad sets up shop at Rochester, where King John and his Vikings spend the entire movie attempting to raze the fortress to the ground and quash the Baron’s forces.

Which is fine, because despite the flat characters and ropey dialogue, Ironclad comes up trumps with its grisly set pieces. Blades in guts. Boiling oil baths. At one point a character even has both feet and hands cut off. Ironclad is probably the bloodiest film you’ll see in cinemas this year. That, and a typically radiant Giamatti, are the only reasons to buy a ticket. Otherwise, Gladiator’s crown rests easy. 3/5

Via Out In The City