Edward Hogg isn’t your run of the mill, everyday movie star. Yes, he’s the luminous lead in trippy mindbender White Lightnin’ (“I’m so proud of it. You feel like you’ve been through something when you watch it”), and yes he’s shagged Carrie Fisher (on-screen, for a scene that – already infamously – had him guzzling champagne by the bucket-load back stage and then vomiting post-clinch). But Mr Hogg isn’t like all the other fledgling Hollywood ankle-biters. For a start, he’s currently working in a pub on Tottenham Court Road. “I don’t know about being a Hollywood star,” the actor laughs as we point out his peculiar predicament, “but yes, I’m still working in a pub. At the moment I’ve got no bloody money!”

The 30-year-old Doncaster native hadn’t wanted to be an actor to begin with, anyway. Hailing from Yorkshire – and still in possession of a distinctive northern lilt – the young Hogg had his eye on an altogether cooler profession. “I wanted to be in a band. I was in a band when I was at school,” he reveals, before divulging said band’s name (not without a whiff of nostalgic pride) as ‘Porno King’. “So I was about 18 and that’s all I wanted to do.” But the world of rock was not for him. One gap year and a jettisoned plan to attend university later, and Hogg “fell into acting” when his sister decided to dabble in am dram. “I’ve not looked back since, really.”

But wait… what was that about shagging Carrie Fisher? Playing Cher to Hogg’s Sonny in White Lightnin’, Fisher is equally electric as her British co-star. The film takes the topsy-turvy life of mountain dancer Jesco White and runs off with it into the dark recesses of a crazed, drug-addled imagination. As the titular Jesco, Hogg found himself starkers (apart from a masking-taped sock in a particularly sensitive area) and simulating love-making with the former Princess Leia. “I must’ve watched Star Wars a million times growing up, I mean it’s on every Christmas,” the actor sighs in his gentle, genial timbre, before adding with typical northern candour, “It was wonderful to meet her, she was absolutely fab.” 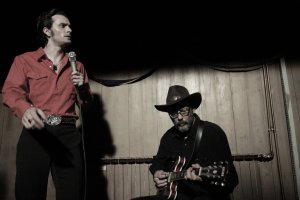 a slew of supporting appearances in the likes of Nicholas Nickleby, Alfie and Brothers Of The Head. Even then he dazzled, looking out from the corners of scenes with his big round eyes and magnetically burning with a quiet intensity. Lightnin’ remains an opportunity that he seems stunned to have been gifted with. Take this: when asked if the sinister material resulted in a difficult or draining shoot, Hogg fumbles, initially stumped by the question. “It’s my first kind of major role in a film, and when I look back now I just remember it being brilliant,” he admits. “It was a bit tiring, there were long days. But it was more thrilling than anything else, I was so excited. I mean I was nervous , but just very, very excited to be involved in something like that.”

The role is an actor’s dream – requiring a certain degree of teeth-gnashing and screaming, but also a subtle, gentle touch that keeps the film (and the character) from teetering into an over-the-top realm of absurdity. As Jesco, Hogg gets high, threatens men twice his size with fire arms, and confronts Fisher in the shower with a broken bottle before turning the makeshift weapon on himself in a blood-gushingly graphic scene. But ask him about any ‘method’ to his acting madness, and Hogg is characteristically frank. “I don’t think of my relatives dying or anything like that,” he explains. “But you do have to get yourself into that kind of mind-space. [Director] Dominic Murphy had this technique called high knees, where I’d jump on the spot for three minutes, and then I’d scream and shout a bit at the top of my voice. And then you’d play the scene. It’s a bit embarrassing, but it really works to get you to a certain place.”

rs, Hogg cut his acting teeth in the theatre. In 2002, he graduated from the Royal Academy of Dramatic Art in London. He quickly earned rave reviews and an Ian Charleson Award nomination for his part in Woyzcek at the Gate Theatre. Jobbing it both on the stage and, increasingly, in film (as well as down the pub), Hogg remains philosophical about the differences in medium. “I like being in film, I like going to watch a film, and I’m in it, and going ‘wow’,” he says. “But, actually, I think doing the physical kind of acting, being on stage, is better. Because it’s happening, it’s instant, there and then all the time.”

He remains particularly close to acclaimed theatre director Daniel Kramer, whom he has worked with on numerous occasions. “Theatre-wise I like working with Daniel. I like to do what he wants to do, he always does exciting stuff. I don’t know what would be my dream job. At the moment I’m really enjoying being in British independent films and doing exciting things. Just to be doing that more, really. To play interesting parts.”

Just don’t expect him to turn into the next Hugh Grant. “I tend to get cast in edgier roles, edgier people,” the actor says. “I don’t really get many romantic leads! So I guess those are the parts I’ll play for a little while. I like doing anything, I like just having a go, you know?”

Looking to the future, Hogg has Bunny And The Bull already wrapped and set for release later this year. Directed by Paul King of Mighty Boosh fame, Hogg plays Stephen, a young man who (according to the press release) ‘takes an imaginary road trip inside his apartment, based on mementos and memories of a European trek from years before’. If anyone can make a film entirely set in one room feel like Citizen Kane, it’s Hogg. Then he’ll be shooting Ollie Kepler’s Expanding Purple World, which the actor describes as “a sweet film, kind of odd. British.” And if that’s not enough, when shooting wraps on Purple World, Hogg will head back to the National Theatre for a stint in Our Class. “You just got to work when you can and do as much work as possible,” Hogg says. Something tells us he won’t be working in that pub for much longer.