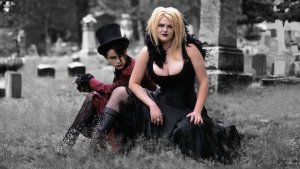 “Something’s got to change,” rabbits director Todd Stephens. We’re on the blower discussing the state of Hollywood’s relationship with homosexuals. More specifically, the number of gay actors still cowering in the closet, scared to come clean about their orientation. “If all the gay actors in Hollywood came out at the same time, the world would have to deal with that reality. That some of their idols are gay. But I don’t see that happening any time soon.”

Something of an authority on gay film, Stephens has made a name for himself directing runaway indie hits Edge of Seventeen and both Another Gay Movie flicks. Right now, he’s here to chat about Gypsy 83, a free-spirited road trip flick starring Sara Rue (her off Popular and Less Than Perfect) and Goth cutie Kett Turton. But that’s not before he lets us know how he feels about those closet doors. “I used to be against Perez Hilton outing people, but now I’m kind of up for it. Like, fuck it. In the case of Another Gay Sequel, I had a couple of guys who were in the first one who dropped out at the very last minute because their agents staged an intervention and told them not to play more gay parts. Some of them are gay in real life but they’re not out.”

Anyway, back to Gypsy 83. Shot in 2001, it’s been a while hitting UK shores thanks to short-sighted distributors who “didn’t think it was gay enough, they didn’t know what the movie poster was”. An intimate dramedy with a soundtrack set to the rock-out refrains of Stevie Nicks, the plot follows Gypsy (Rue), who decides to break out of her small-town apathy by driving to New York with gay best friend Clive (Turton) and enter the renowned Night of a Thousand Stevies contest. “I really wanted to explore the relationship between gay men and straight women,” Stephens reveals. “That sort of amazing bond that we often have as gay people. Our diva best friends. There’s a connection, and a love, and an intimacy, but no sex. Yeah, it’s very complicated.” And trivia fans prick up those ears, apparently Chris Evans of ‘Fantastic Four’ originally auditioned for a role in the film as a gay jock. “He wanted to be in the film and I gave the part to somebody else. I could kick myself now,” laughs Stephens.

A deep thinker with a celluloid soul, Stephens is just as interested in shooting cute guys doing naughty things as he is exploring the myriad gay issues that marshal our community. With Another Gay Movie – a queer American Pie that fuses teen angst with gross-out gags – he enjoyed toying with gay stereotypes. “I tried to do a lot with the feminine character of Nico,” he says. “I really wanted to celebrate that and sexualise him. I feel like the queen never gets to get laid. It bothers me that a lot of gay people are bothered by portrayals of effeminate gay men; that’s just part of the rainbow of our community.”

Up next, the director is pulling together funds for his “dream project”, a film entitled Flamingos. “I’m sort of fascinated by gay stories that haven’t been told,” he divulges. “What it’s like to get older and deal with aging in the gay community is something that fascinates me. I envision it as a kind of gay Golden Girls.” And who would he want to star? “I’d love to get people like Morgan Freeman to play gay. People who are really established and willing to take a chance. Jack Nicholson as a queen would be hilarious.” Now that would be a coming out to remember.