20 May, 1998. Thirty-two-year-old Charlie Sheen is out of control. Having survived a veritable highway pile up of misdemeanours and criminal allegations – of which the apparent battery of girlfriend Brittany Ashland proved the most disruptive – this rebel without a cause favours crack and prostitutes over a quiet drink down the local. Charismatic, loaded, proud possessor of BMW, Porsche and private yacht, Sheen is having the time of his life. But the jig, as they say, is up. After hours spent smoking crack, something’s wrong. Sheen is rushed to Thousand Oaks Hospital in California with a suspected heart attack.

When it becomes apparent that drugs are the cause of his system arrest, Sheen is admitted to the Promises rehabilitation centre. Having stayed just one day, he escapes in his limo. But it is to be a fleeting bid for freedom – the police, lurching into action after a tip off, quickly pull him over for drinking and self-medicating. The tipster’s identity? One Martin Sheen – daddy dearest.

The culmination of a lifetime rammed with reckless, boundary-bashing behaviour, Charlie Sheen’s shambolic nosedive into drugs, dames and tabloid tittle-tattle could have been predicted by any short-sighted fortune teller. Born Carlos Irwin Estévez in September 1965 to an artist mother and up-and-coming television star father, his was always going to be a life dictated by drama and domestics. Third in line to what would become a family of actors – alongside sibs Emilio, Ramón and Renée – theirs was an impassioned clan of keen talent and fiery disposition.

From an early age Sheen dreamed super-size. His first taste of the camera lens came when he appeared, aged nine, as an extra in TV movie The Execution of Private Slovik alongside his father. But it wasn’t always film that had him moon gazing. As a teenager at Santa Monica High School in California he turned heads not for his acting, but for his prowess on the baseball pitch. Aspiring to one day play professionally, Sheen’s lapse in movie-making curiosity at this time stemmed from a childhood experience on the set of Apocalypse Now, when he witnessed his father in the throes of a severe heart attack. Visiting him in hospital aged 10, Charlie was the only family member not to cry, despite his horror. “He came back so pale and sick, so weak and thin,” Sheen later recalled. “This world of fantasy and artifice that I’d known suddenly was about real life and death. It was enough to keep me away from acting for a long time.” 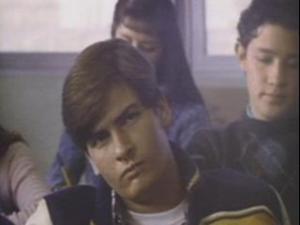 squirming through his DNA. During his high school years, Charlie dabbled in Super-8 movies. The stars of said flicks? Schoolmates, and future Brat Packers, Rob Lowe and Chris Penn. Something altogether more nefarious was also squirming, and high school similarly heralded the first of his many grazes with the law. He had smoked his first joint at 11, but it was aged 16, on his mother’s birthday, that he was detained for possession of marijuana. Bailing him out, his father took him straight to church. A year later he was arrested for the illegal purchasing of merchandise using stolen credit card receipts. Having conned his way into the bins of the Beverly Hills Hotel, Charlie and a friend foraged for said receipts and embarked on a four day spending spree, procuring televisions, watches, Walkmans and jewellery.

He was eventually outed in front of the whole class. “I’m standing in front of my art class,” he remembers, “second period, senior year, when two cops walked in. They said, ‘You are under arrest for credit card forgery.’” His mother footed the bill, and mere weeks before his graduation, Charlie was turfed out of school thanks to poor grades and bad attendance.
Acting became a firm priority. Sheen actively sought roles out and aggressively pursued them, finally landing a lead part in the never-released horror sequel Grizzly II: The Predator in 1984, acting alongside a then-unknown George Clooney. Later that same year he nabbed a small but pivotal role in Red Dawn, his first official cinematic dabbling.

1986, after a brief but memorable stint in classic ‘80s teen comedy Ferris Bueller’s Day Off, that Charlie hit the mother load. Oliver Stone cast him in his anti-war epitaph Platoon, and as young idealist Chris Taylor, Sheen’s nuanced portrayal of romantic, teenage naivety giving way to chaotic, heart-rending understanding got tongues wagging. The critics raved (“the best film of 1986,” sang Roger Ebert), and a star was set ablaze. Stone went on to cast Sheen as slick Bud Fox in his next film, Wall Street (“a film that crackles with raw power,” said we), even granting the emerging actor the choice of who would play his on-screen father. Ever loyal, Sheen chose his own pops over Jack Lemmon. But the pair’s relationship was a strained, tenuous affair. Stone had approached Tom Cruise about playing Fox, but was hampered by his commitment to Charlie. Later, when Charlie auditioned for the character of Ron Kovic in Born On The Fourth Of July, Tom Cruise took the part and Charlie heard the news from brother Emilio. Sheen and Stone haven’t worked together since.

Despite the high profile fall-out, movie successes continued apace. Having proven his mettle with hard-bitten dramas, Sheen stumbled upon the genre that would – years down the line – eventually prove his career salvation: the comedy. Delivering laugh out loud lines with po-faced, Leslie Nielson-style sincerity, he had audiences rolling in the aisles with Major League and Hot Shots. But as expectations mounted, flops followed. A brotherly pair-up opposite Emilio in Men At Work and a rare Clint Eastwood duff (The Rookie) failed to ignite both the box office and Sheen’s creative energies. Now the early nineties, he was becoming dependant on illicit substances for entertainment, while steadily gaining a reputation as a playboy, employing a startlingly frank stance with the press (“I’m honest everywhere else. Why should it stop here?”) and indulging in fast cars and fire arms.

Tabloid fever was just beginning to rev its engine, and outspoken Sheen’s personal life provided the perfect ammo. Already father to five-year-old Cassandra Estevez, whose mother – Paula Profit – he dated but never married, Sheen’s involvement with the fairer sex was the cause of much controversy. In 1990 his relationship with fiancée Kelly Preston was cut short after he accidentally shot her in the arm. The circumstances surrounding the incident remain murky, but Preston escaped relatively unscathed, requiring just two stitches.

It was an altogether more exotic femme who would come to define – and damage – Sheen’s image throughout much of the nineties. Her name? Heidi Fleiss. An extremely successful ‘Hollywood Madam’, Fleiss provided call girls to big earning men. While she was under investigation by police in 1993, Sheen’s name was discovered amid her paperwork, listed as one of her top clients. The details were shocking – Sheen had spent over $50,000 for services rendered by 27 different prostitutes over a period of 15 months. Adding salt to the wounds – and now hooked on cocaine despite a stint in rehab – Sheen was requested to give evidence against Fleiss during the 1995 court case brought against her. His first marriage – to model Donna Peele – didn’t survive it, lasting just 14 months. “She’s an angel sent from Heaven to take me through the rest of the journey,” he said at the time, later adding, “You buy a car, it breaks down.”

Not surprisingly, his career wavered and wit 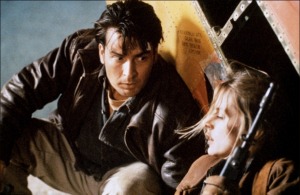 hered. Pairing the likes of The Chase with Terminal Velocity, not to mention relationships with two adult movie stars (Ginger Lynn Allen and Brittany Ashland), Sheen was on a downward tailspin into straight-to-video hell. Addicted to class A drugs, popping bills like they were smarties, and drinking two or three bottles of vodka a day, things hit somewhere in the vicinity of rock bottom when, in 1996, he was arrested for the battery of Ashland. Sheen pleaded no contest, was given a year’s suspended sentence, two years’ probation and a $2,800 fine.

Later that same year he announced that he had “found God”. A stand-out cameo in Friends (comedy, again) as a Naval officer romantically attached to kooky Phoebe (Lisa Kudrow) raised a positive smattering of applause. But a branching out into sci-fi with alien invasion flick The Arrival proved less successful, as did political turkey The Shadow Conspiracy. A brief respite came in the form of Money Talks, which pitted Sheen against comic squawker Chris Tucker as a satirical television tabloid reporter. Sheen, however, couldn’t escape the fact that he was an addict. Just a few months later he fortuitously took the overdose that would land him in Thousand Oaks Hospital.

“I had been praying for Charlie’s sobriety for years,” father Martin recalled of his dramatic decision to call the cops on his renegade son. Guilt over his son’s traumatic experience on the Apocalypse Now set, mingled with his own past encounters with prohibited substances, drove Pa Sheen’s actions. Numerous family interventions and attempts to convince Charlie that he had a problem had fallen on deaf ears. Not even Clint Eastwood could get through his bull-headed resolve. In 1990, Charlie recollected, “dad said I had a phone call. It was Clint Eastwood. He said, ‘It’s only for 30 days. Then you get the rest of your life. Go get better.’ I didn’t go to meetings. I didn’t read the book. I thought, ‘Do a year, get everybody off your back and sneak back into your old lifestyle.’”

h, sobriety stuck. Things had to get better. “I was just sick and tired of being sick and tired, of living like a vampire.” Cleaning up his act, Charlie dipped a tentative toe back into the film pool with a well-placed cameo in mind-bender Being John Malkovich. Then, with trademark equanimity and humour, he accepted a role in brother Emilio’s Rated X, an autobiographical TV movie in which he played adult filmmaker Artie Mitchell, notorious drug taker and sex aficionado. Things were definitely in the ascendant, and as the nineties came to a settled close, Sheen was approached to replace Michael J Fox as the lead in long-running poli-sitcom Spin City. Appeasing the general public with a character that more than faintly echoed his outrageous past, Charlie steered the show for two more years, picking up a Golden Globe for his troubles.

Romance was also in the air. After meeting busty, ballsy actress Denise Richards on the set of Good Advice in 2001, the pair tied the knot one year later. Like all of Charlie’s romantic ruminations, it wasn’t to last. While pregnant with their second child, Richards filed for divorce on 19 April, 2006. The split was far from acrimonious, with Richards alleging abusive and paranoid behaviour, and continued problems with drug addiction. The pair remain embroiled in a hostile custody battle for their two daughters – Sam and Lola Rose – with Richards insisting that she be afforded the authority to make final decisions on their wellbeing.

Unlike in the past, trouble in Sheen’s private life has thus fa

r failed to translate to the screen. Having landed the lead role in sitcom Two And A Half Men, the top rated show for NBC in the States, Sheen is reportedly clean and sober. And nobody is prouder than dear old dad. “I hold Charlie’s accomplishments dearer than my own,” he gushes. “He has been through so much and overcome so much more. Even if he weren’t my son he’d still be my best friend.” Either a testament to the fickle, short-term memory of Hollywood, or evidence of a canny businessman struck with the realisation that laughing at himself is far more advantageous than having the world laugh first, Sheen is a born survivor. Over to the man himself… “I don’t think it’s wise to dwell on regret. There’s regret, sure. But whatever you’ve done – good or bad – is a part of who you are now. That’s the thing you can change and improve.”